So much new building by both local authorities, and well meaning aid organisations, seems to be simply a numbers game. There’s  little thought for making new facilities child friendly, sustainable or thermally efficient and so few function well as flexible or inspiring spaces to learn.

Crumbling, unsafe and ineffective old school blocks like this one, are simply replaced with shiny, concrete, equally ineffective classrooms.

Outdated, unresponsive and lacking innovation they will form the mainstay of school real estate for the next 50 years.

We were approached by another NGO from a neighbouring district who asked us to help them break this mould. They’d seen and been inspired by our Balimtar Nursery School project and asked us to design four new primary classrooms, to replace an existing old school block. We made our first site visit.

The existing block (above and below left) was perched right on the edge of a South facing hillside,  with exceptional 180 Degree views of the valley (below right).

Two enormous trees provided very significant shade from the hot daytime sun to the South and West of the existing block.

The most striking potential was for some exceptional shaded external spaces – with magnificent views. 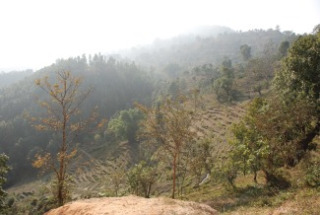 To the East, a large tract of flat land, with similar commanding views, was as yet unused. And so the idea emerged to design two blocks of 2 classrooms instead of one block of four. One would be  to the East of the site, and the other would be in the position of the existing block.

Over 4 months, in collaboration with the head teachers and School Management Committee from Sarasoti Primary, Tandrang VDC, our design team began to develop an enhanced RCC plan for four new classrooms in two separate blocks.

Each classroom would have it’s own self contained external play and teaching space, while still maintaiing a central playground for ball games, assembly, and other communal activites. Site engineers also decided that two blocks would be perform better than one – as long rectangular buildings tend to perform badly in severe earthquakes. The school was in a Category 12 (the highest) earthquake zone.

After several further visits, perfecting the design with the teachers and villagers, we presented the plans (above and below) to local parents and to the Sarasoti School Management Committee.

As a test, the NGO’s contracted engineer also submitted a potential plan for a single 4 class block, without the interior innovations or access to external teaching and play spaces. This was a design all parties were much more familiar with, in Nepal, but both teachers and villagers unanimously voted in favour of the new designs.