Few things are as satisfying as watching a 10 year old child, who’s heard of, but never seen a real computer, start to play with one. You can almost feel the wonder.

And few things are more difficult than trying to tell a room full of 10 year old’s, playing for the first time, that, in fact, it’s time to go home now.

In the months since the first computers have been in Dhawa, the school children have queued outside, stampeded in after lessons, barricaded themselves inside, tugged, pulled and yelled at us in their eagerness to learn – and it’s never once been a problem. Some things just need to happen.

BRINGING THE FIRST COMPUTERS TO DHAWA

Constructing a reliable IT & communications infrastructure is, perhaps, the key stepping stone for any remote community that wants to be competitive. But there are dangers – and ancient cultures and traditions can be especially vulnerable. Remote communities need safeguards before, simply, turning on YouTube.

On the other hand, being able to engage with the rest of the world from your distant hillside; to hear or see events on the other side of the world, as they happen; to read from the world’s libraries, view other cultures’ images and films, or listen to their music; and to communicate freely across those vast distances –  without having to leave your surroundings – well: that all sounds pretty good.

Almost everyone in Dhawa had heard of the internet – and a great majority were intensely excited whenever we discussed trying to bring it in 2011. But very few villagers could tell us exactly what it was. That, at least, was easy to remedy.

For the logistical challenge  – to bring high speed broadband directly over the mountains, from the DSL connection at Katani, outside Kathmandu, we enlisted the help of Nepal’s most famous teacher and wireless internet evangelist Mahabir Pun.

Beginning with a fundraising campaign through 2012, we together devised a plan to bring the internet to all 14 schools in the VDC, beginning with Shree Prabhat in October 2012. Our original pitch to the Gorkha District Education Board can be downloaded here.

In March 2013 our proposal to connect the whole district with a wireless mesh network won an invaluable placement from Engineers Without Borders (EWB-UK). On sabbbatical from AMEC, UK Engineer Matthew Bowman designed a self healing, self routing wireless network that would be simple to maintain, and easy to propogate throughtout the whole district.

In October 2013, with Matthew in Dhawa, we began to build Dhawa.net, aiming to become the first fully functioning, rural community owned Internet Service Provider in Nepal.

Our aim was for the first 7 schools, the main health post, and the majority of Dhawa’s hillsides to have high speed wireless access by June 2014. With this in place, a software layer to manage the users would allow the system to begin to generate funds towards its own maintenance and to begin transition of ownership to the community. A locally led expansion plan would then follow, drawing from the example Matt provided, to expand coverage to the remaining schools in the VDC and the wider population.

02/12/13, a father in Saudi Arabia, away from his family here  in Dhawa for more than 17 months, saw his 11 month old son for the fist time, in a skype call from Shree Prabhat school. There wasn’t a dry eye in the house.

In June 2014, Matt returned to the UK and a new EWB-UK role coordinating placements to the Region, including the continued Dhawa.Net project. Another EWB-UK volunteer deployed to the village in October 2014, for a 3 month project, picking up the baton and paving the way for the software layer.

In Autumn 2010 we were let down by a major IT sponsor who’d pledged to support us once we’d installed Dhawa’s first electricity supply. It was a major blow. Introducing the first computers for the children and villagers was one of our key goals.

In retrospect, however,  the loss has become a gain. In Summer 2011 we formed a new strategic

The Aleutia T1 R – a rugged tiny computer with a mighty punch In Autumn 2011 we brought our first Aleutia computers to the village. And so began an extraordinary transition.

Instead of the usual big, power hungry towers full of moveable parts, we had tiny, rugged, state of the art computers with NO moving parts, that used just twelve watts of power.

For the users, they run the same software, only quicker. For the school – they will last years – with solid state drives, no fans, replaceable power supplies, upgradeable flash memory and enough ports to run a disco.

Why didn’t we think of this before? We’re not sure, but perhaps because we had never heard of a low power computer until we started looking for one. And the new machines are more than just effiicient – they’re designed to operate in remote regions, where power may be unreliable and scarce, and maintenance is far away. If you drop one, nothing happens. And all machines ship with spares.

When paired with super low power LED Razr screens (using just 13 Watts) the school’s new machines would not look out of place in a London ad agency. But thanks to Aleutia, they’re affordable and they use 84% less power than a normal computer (average 110Watts). No surprise that they’ve started seeing some very large orders from government departments and big companies in the developed world. Rock on guys. 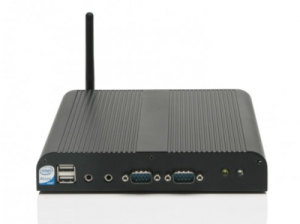