I’m not sure how many more photos I can take now of the devastation around my home here in Dhawa. Every time I look at the unrecognisable piles of rock and twisted metal, their jovial resilient owners lost for words, my stomach is in knots.

After 36 hours of triage, with our teams putting up big emergency community shelters, a medical camp, and gathering data with village leaders from house to house, the trucks and helicopters had delivered our first phase supplies. Our next 72 hours would be organizing and distributing direct help for the roughly 240 individual families who’s houses have been completed destroyed.

If I’d been affected by the destruction in Balimtar, where we built our last primary school, the only building in the village to survive unscathed, nothing could prepare me for the sheer devastation that we would find just below in the even poorer, bhuddist village of Balbuatar.

Right next to the mighty Budi Gandaki river, Balbuatar means “place of sand” and we’ve often mined sand at the river bank for our various buildings in Dhawa. The people here speak their own Tamang language and while everyone mixes they have quite a distinct culture from their neighbours. They’re also loads of fun. It’s one of the most beautiful river valleys I’ve ever seen – a wide flat canyon with massive vertical flat topped cliffs on one side, and our mountain on the other. But as we made our way down the winding dirt road we were greeted by an apocalypse.

Our truck rolled in with a brilliant group of Nepali volunteers from Kathmandu – young dedicated volunteers sourced through Nripal and Pemba. And the whole village came out to see the first big vehicle to arrive since the disaster. Under the big People tree, hundreds began to gather.

I went quickly to find Sila, who’s been working with us for 3 years. A tiny, wiry man in his late forties, I’ve seen Sila cut down a 5 foot wide hardwood, with a blunt axe. He can fashion a perfect stone corner block from a boulder in minutes. I’ve never seen anything that can defeat him.

I found him drinking Roksi, the local fire water, vainly trying to ignore what lay in front of him. He was staring blankly at his unrecognisable pile of rubble where his house had once been, pushing dirt around with a stick. Like all his neighbours, he’d lost everything – his supply of food, clothes, bedding, tools, and his only real possession – an old watch his mother had given him years ago, which he always wore with such pride. When he saw me he jumped up, and hugged me. Then he showed me his empty wrist. Gesturing at his pile of rubble again I saw that look. He was beaten. He just had no idea what to do.

Around him every single other person was in the same position. Almost a hundred homes, just here, completely destroyed. With the genial Saugat taking the lead, one by one we began to hand out blankets, bedding, and tarpaulins. As young and old clutched what for some would now be their only possessions, besides the clothes on their backs, I wondered how this poor but beautiful village could ever recover. A tarpaulin, a few blankets and some foam mattresses – despite knowing this was really helping, I couldn’t help feeling that we were putting a band aid on a shark bite.

We met with Save the Children for the second time yesterday when thankfully they managed to make it all the way to Dhawa. Co-ordinating with then on the first phase of relief is a huge help, and we’re sharing the data we’ve gathered so we can try to offer sustained support in the coming weeks. They had 250 more high quality tarps and more blankets which have made a difference today to offer first line support to more and more people. But we all knew we had to address the elephant in the room. A tarpaulin is unlikely to last the 2-3 month Monsoon. We’re going to need hundreds of strong tents or tin roofed shelters. And every other district is in the same boat.

As each household got at least some temporary relief, I took off around the village with Mandav, a young doctor and a nurse, to look for casualties. Six days on I was not expecting to find any, but then we found and old man who’d been pulled from the wreckage of his house by his Nephew. Five feet of rock was on top of him. And he fell from the second story as the building collapsed around him. For six days he’d been lying on the floor, and now he could scarcely talk. His left leg would not bend, he couldn’t lift it. And while not yet in mortal danger, he was in terrible pain.

As Mandav checked him over his Nephew told us they had carried him to the nearest town, Arughat, but there had been no working x-ray machine as the hospital itself had been damaged, and swamped with casualties and deaths. They’d carried him home with just ibuprofen and paracetamol. He was taking only one per day – I expect because the hospital had lost it’s supplie 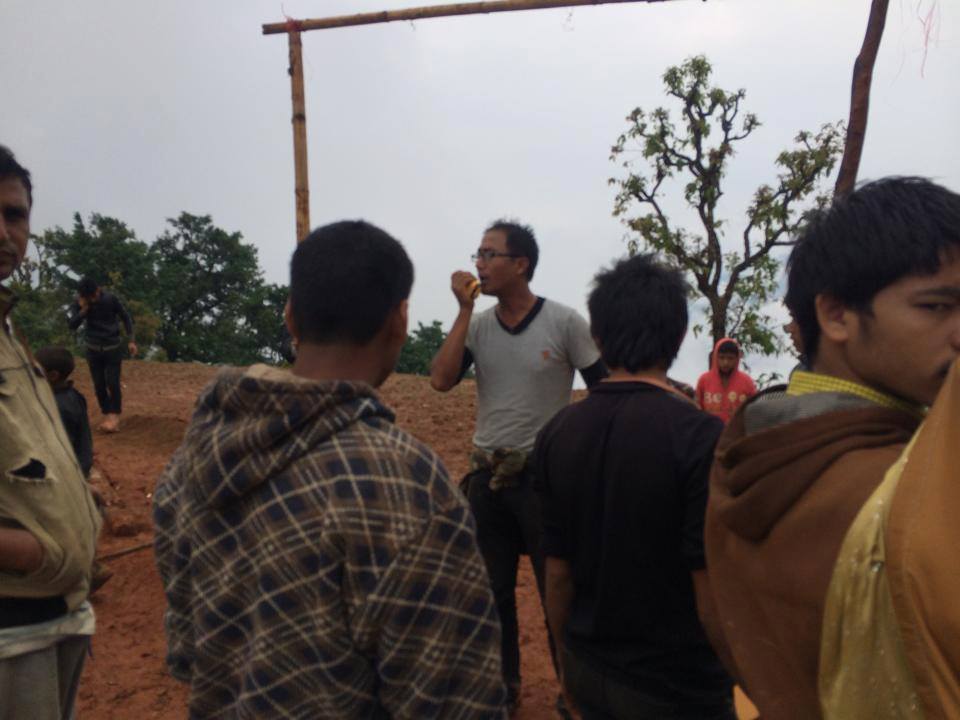 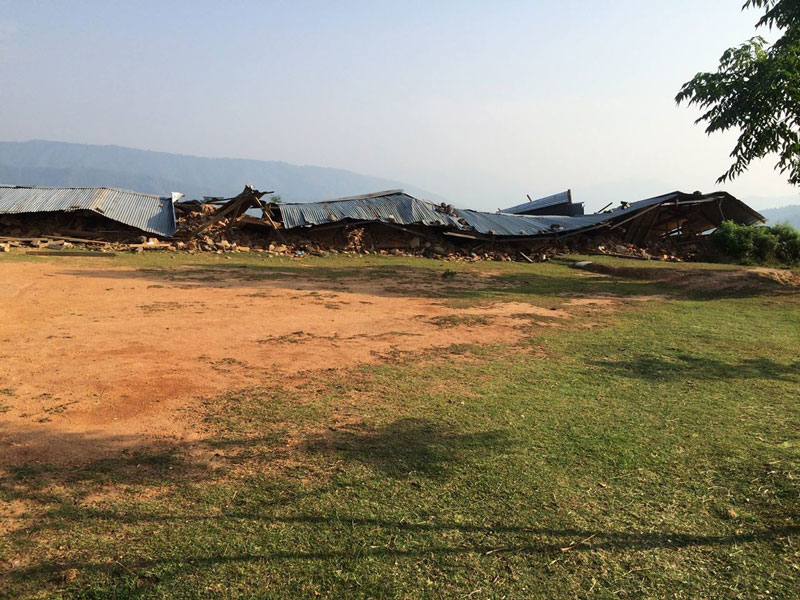 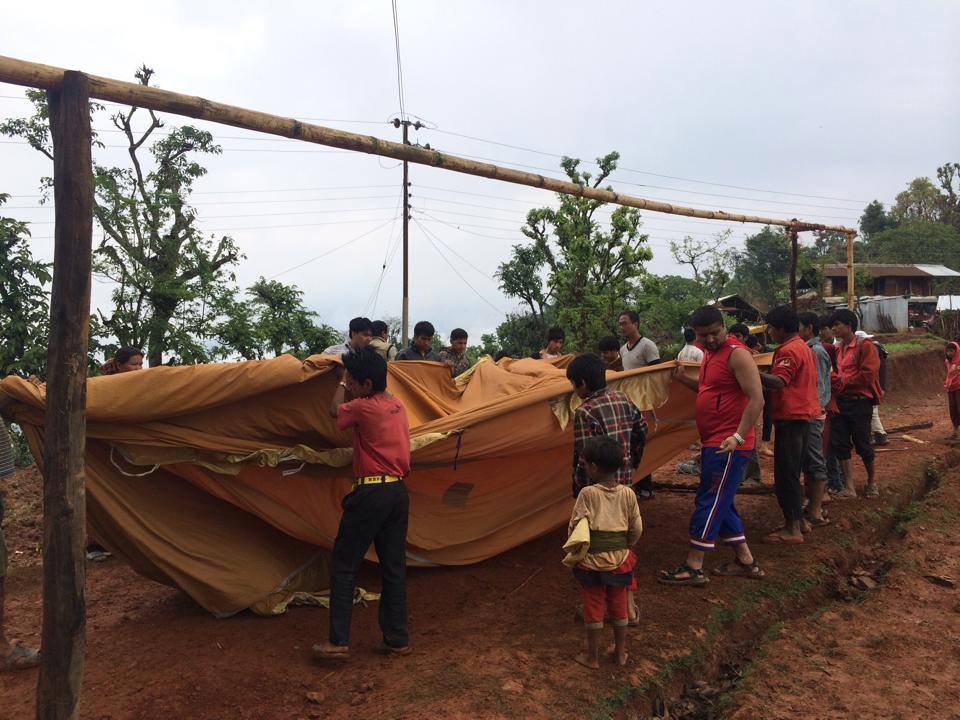 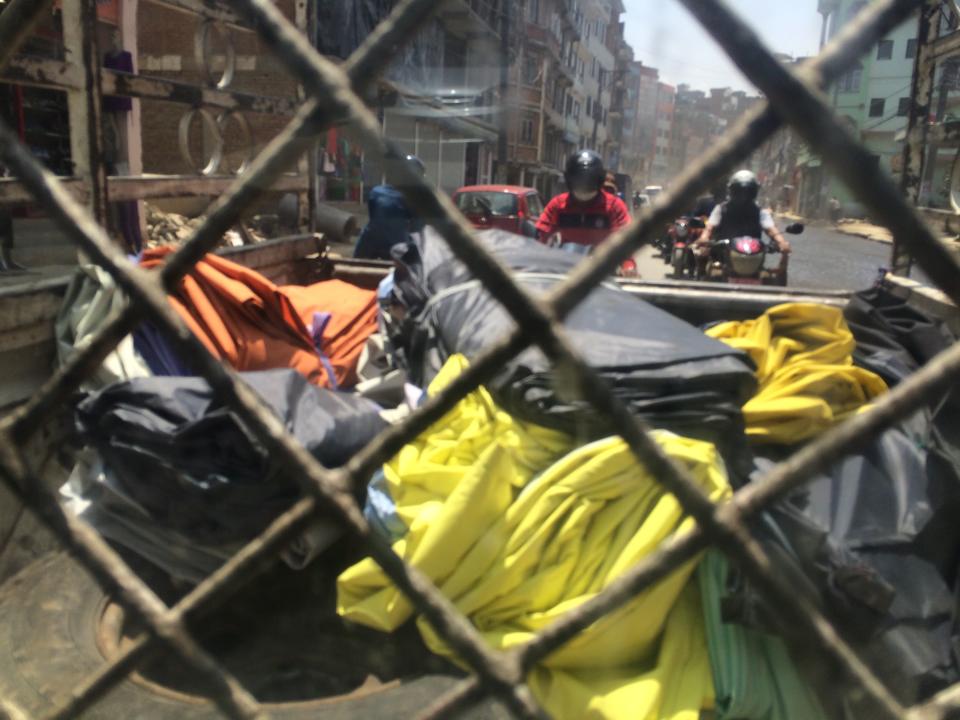 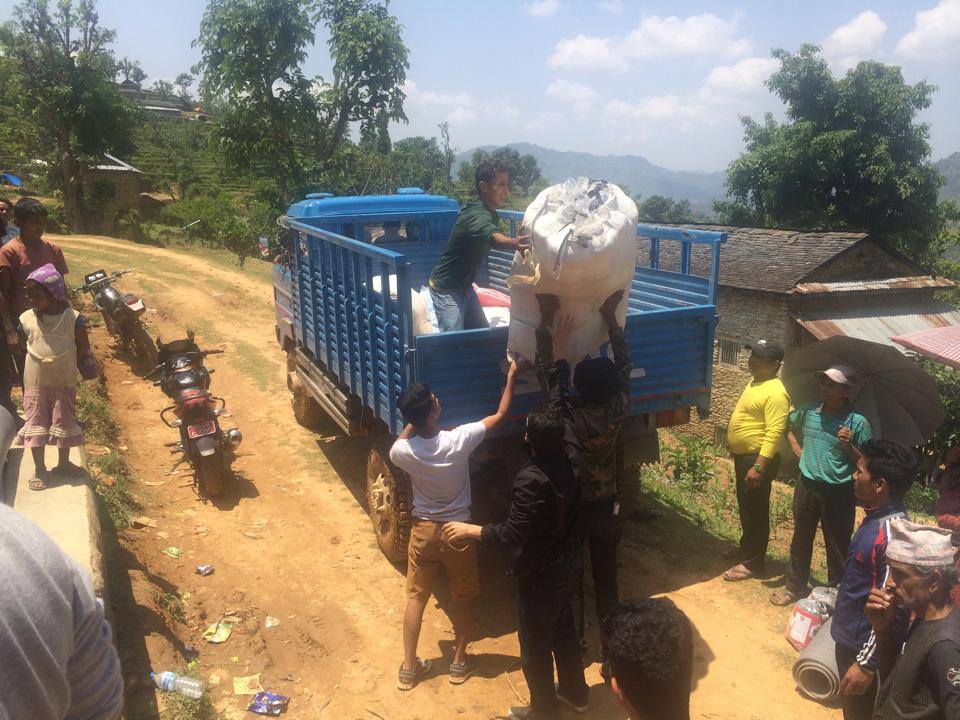 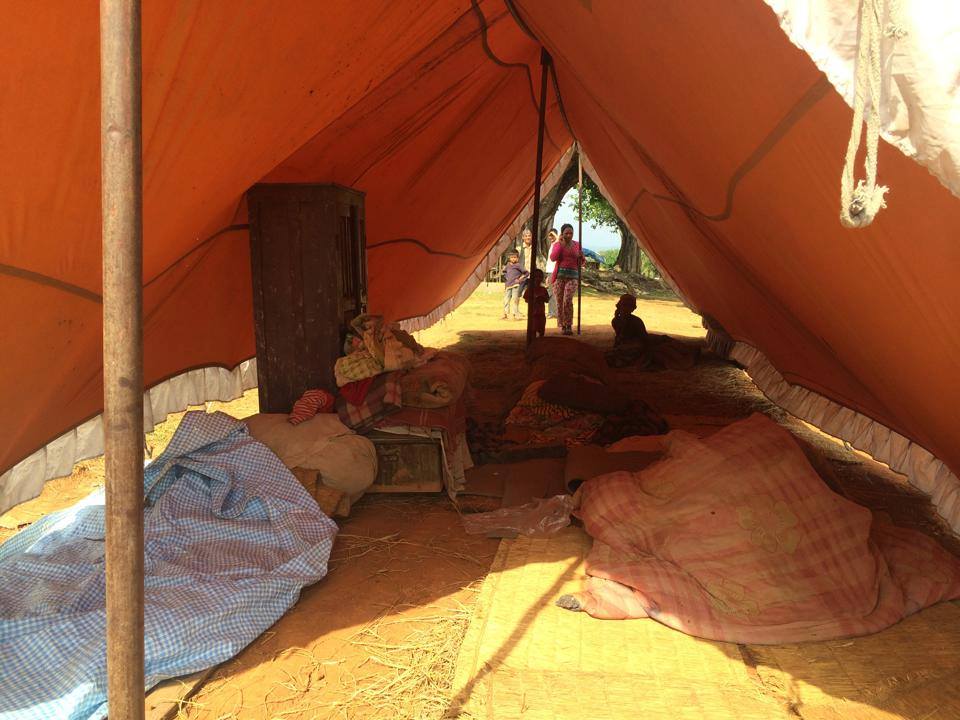 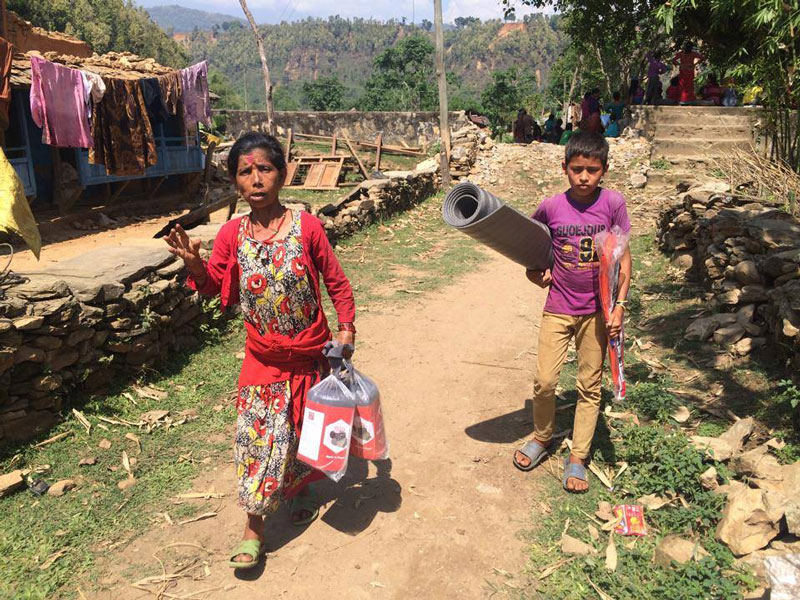 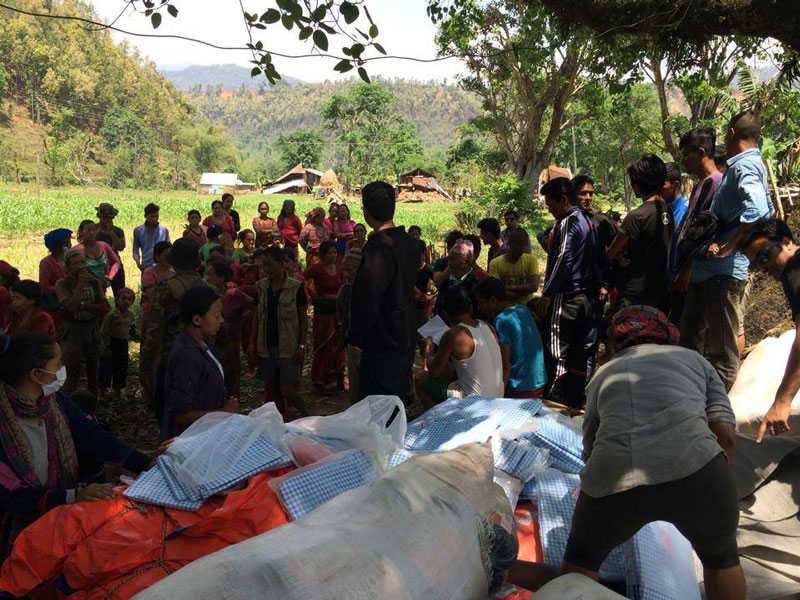 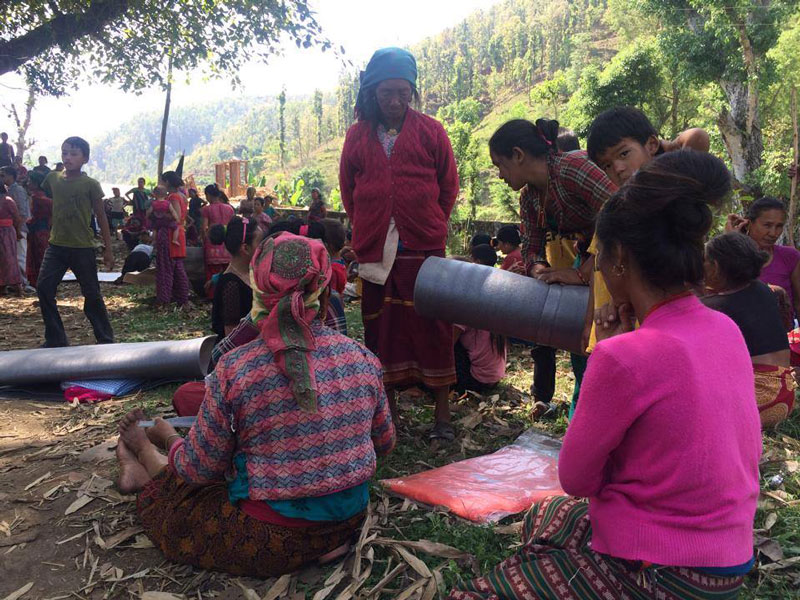 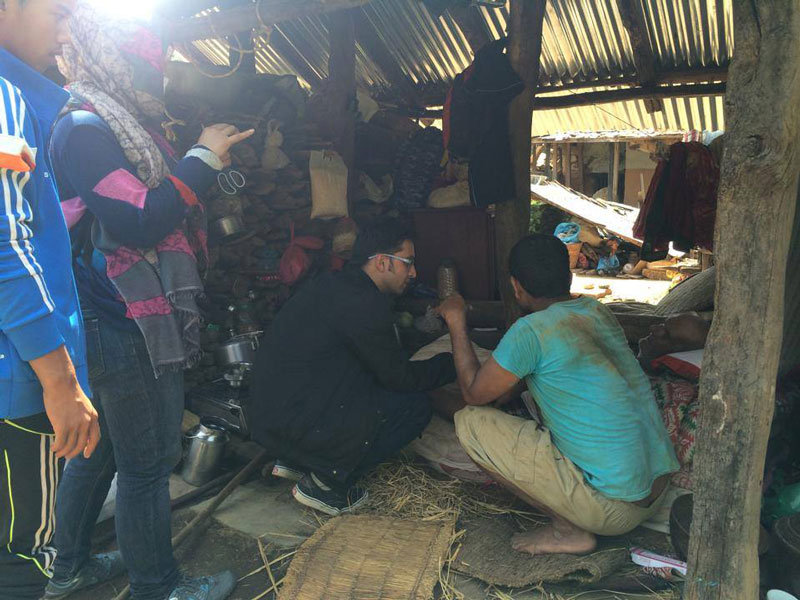 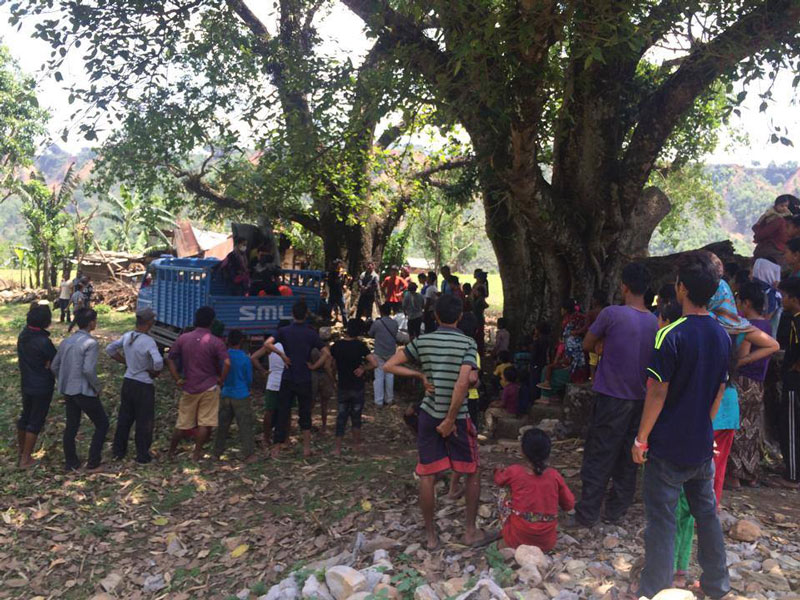 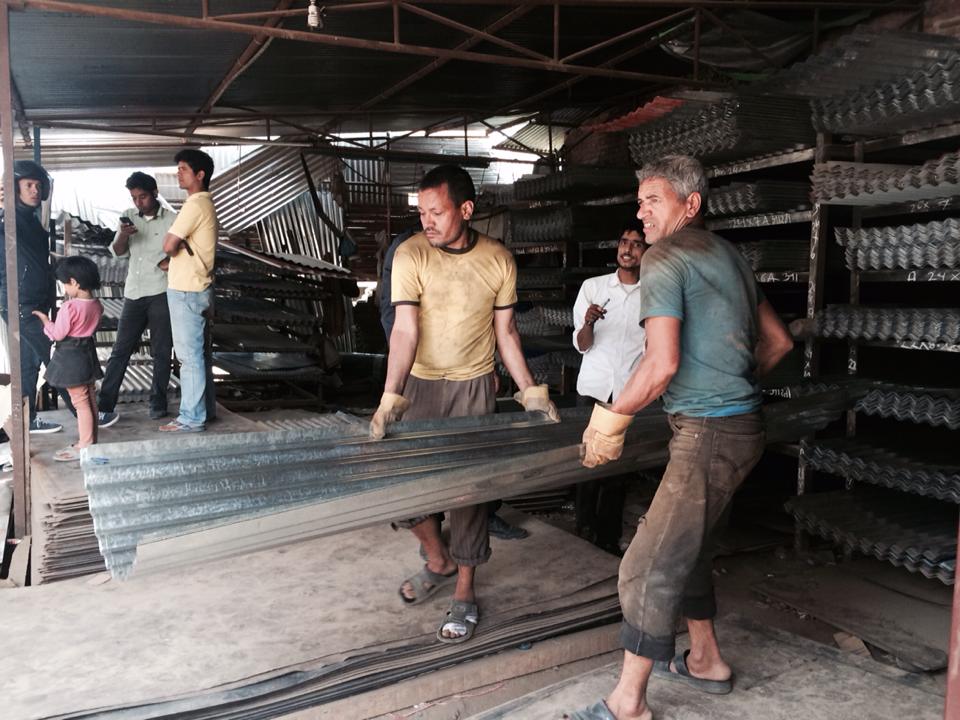